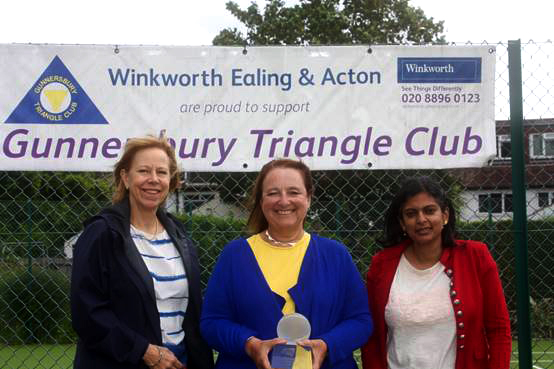 A national award winner from West London has received a visit from not one but TWO local MPs after she was named the country’s 2019 ‘Volunteer of the Year’ as part of the LTA Tennis Awards earlier this summer.

Marina continued dedication to the thriving tennis and multi-sport club were recognised last month by the LTA, the national governing body for tennis, as she beat off competition from a record number of nominees around the country to win the prestigious Volunteer of the Year award.

A member of Gunnersbury for 30 years, the Chiswick resident is now Chair of the club’s tennis committee. Marina has been the driving force behind the club’s successful development in recent years, with her inspirational vision and energy helping achieve extensive improvements to the club’s facilities, including full disabled access and facilities. She has also helped the club substantially grow its membership, organising its open day, promoting the club in the local area and re-invigorating its social tennis sessions.

The MPs received a tour of the facilities before taking time to talk to Marina and other members about the club, which prides itself as being one of the friendliest sports clubs in the area.

Marina’s MP Rupa Huq, said: “I’m delighted that my constituent Marina is, if not quite one in a million, is one in 25,000 by finishing first amongst all other volunteers in the country to be the LTA’s volunteer of the year. It was great to meet her and venture over to Hounslow borough to discover Gunnersbury Triangle Club which has undergone a number of improvements to facilities and growth in membership thanks to her enterprising spirit and boundless energy.”

I was delighted to hear about the range of activities the club delivers including social events, bridge and coffee mornings as well as venue hire for parties and family events – all key to combating the loneliness agenda we hear of in modern society”.

Gunnersbury Triangle Club is based at The Ridgeway, near Acton Town station, founded more than 90 years ago on land donated by local builder George Cooper, who built the Triangle estate.

“Gunnersbury Triangle Club is a genuine asset to our community, and so I am delighted one of their members has been recognised at a national level by the LTA with this award. As well as getting more people active, tennis is a very social sport, and clubs like Gunnersbury provide a shining example of the benefits that can bring to people. It was a pleasure to meet Marina and everyone else at the club, and I look forward to hearing about their continued progress.”

The club’s friendly approach has been central to their success, welcoming everyone, whatever their age or ability and offering team tennis, coaching, social play (including afternoon tea) and a very active junior section. The Club also offers excellent facilities for table tennis, snooker, karate, yoga and other activities, and welcome purely social members with a wide range of social events. Find out more about Gunnersbury Triangle Club at gunnersburytriangleclub.org.uk.