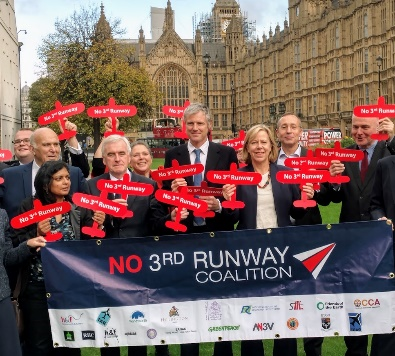 After the ruling by the Court of Appeal that the Airports National Policy Statement on Heathrow Expansion was unlawful Ruth Cadbury MP has issued the following statement.

''I'm so pleased that the Court of Appeals has ruled that it was unlawful for a third runway to be built at Heathrow Airport. This is a huge victory to all those who've been campaigning against a third runway, and the damage it would bring both to West London but also to our global efforts to tackle the climate crisis.

The court ruling has confirmed what many activists, scientists and climate experts have been saying for years- which is that a third runway would be a disaster for our environment and our commitment to the planet.

Despite the spin, the myths and the hot air coming out from the aviation industry it's clear that we cannot continue with a business as usual approach which ignores temperature and sea level rises, whilst people across the world suffer from the climate crisis.

The Government now need to make it clear that there will be no third runway at Heathrow Airport and no increase in the number of flights coming into the airport on the existing two runways. I will keep campaigning and standing up for the rights of local residents who would have been impacted by the pollution, congestion and disruption that the third runway would bring.''

The Full summary of the decision by the Court of Appeal can be found here<https://www.judiciary.uk/wp-content/uploads/2020/02/Heathrow-summary-of-....